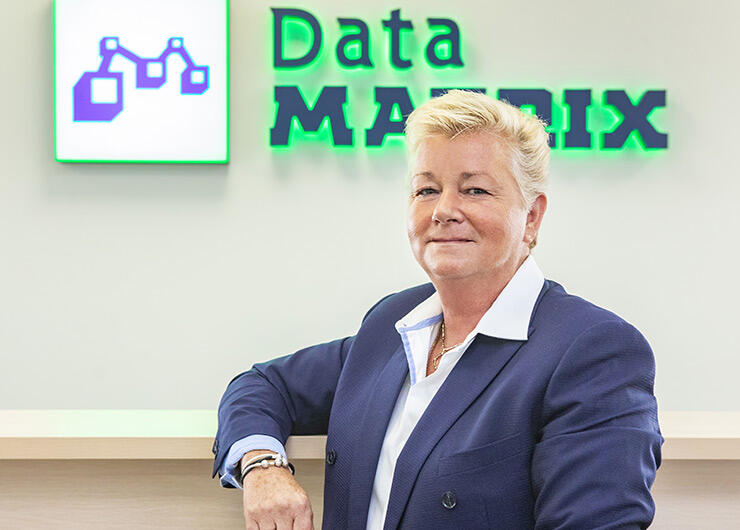 With more than 25 years of experience in developing global sales, markets and operations for  both American and European companies, at Data MATRIX Maxime is responsible for creating and fulfilling the strategy for expanding into new markets, whilst driving operational excellence and developing additional and new arenas for growth.

“It is both an honour and pleasure for me to be joining Data MATRIX as their Chief Strategy and Development Officer. I look forward to supporting both strategic growth and onward further success of the company. Our best work happens when we embrace making a difference, and this is how we achieve it.” Maxime Stevens, Chief Strategy and Development Officer, Data MATRIX.

Maxime is also highly recognized for her long and rewarding experience of running operations for South Africa’s World Health Organization (W.H.O). She also sat for four years on the FDA advisory and ethical boards for Innovative Medical Device approvals.

As CEO for Pierrel Research International AG, Maxime was instrumental in wholly restructuring a troubled global company with 28 offices, increasing investments, backlog and revenue pipelines by more than 200%, and securing SIX Swiss Exchange listings of the merged companies in 2014.

This appointment has been a logical and consecutive step in Data MATRIX global expansion strategy. While being one of the leading providers of eClinical in Eastern Europe and the pioneer of ePRO in Russia, Data MATRIX has already secured long-term collaboration with 6 out 10 Big Pharma. While earlier this year (April 2019), the startup announced its partnership with Seoul CRO on exclusive terms for the South Korean market, the company has also been actively looking into partnership opportunities with a preferred-vendor status in Latin America. Maxime’s extensive global experience, most notably in MENA, Africa, Europe and the United States, is a valuable asset for Data MATRIX as the company moves toward global expansion.

Already in the month of October Data MATRIX  has supported its first Sponsor into adopting and starting to use their new and intuitive data management platforms. This has been achieved with ease, within all timelines, and at a significantly lower cost than other competitors in the market. In addition, this week Data MATRIX has been awarded yet another significant project for their new platforms, reflecting the trust both local and international markets have in both the company and the teams behind the scenes. Clean and reliable data is becoming more critical as the complexity of the clinical research arena grows, and the competition for new and emerging drugs increases. Our clients demand 24 hour service, intuitive interpretation of the data, with totally reliable data outcomes that meet both FDA, EMA and MoH standards. Data MATRIX has proven that it achieves and meets all our clients’ expectations, within or before given timelines and at affordable costs.

Considering the pivotal role eClinical solutions play in overcoming many of the challenges in emerging markets, improvement of clinical data quality and patient safety, with Maxime on board  Data MATRIX intends not only to contribute to the overall rise of eClinical and quality of clinical data, but also to become pioneering leaders in intuitive data technology.

Dmitry Sharov, the founder of Data MATRIX, formed part of Rusbase ranking with the the most successful Biotech entrepreneurs.
#news

The list was forwarded to the Premier Minister of the Russian Federation. Data MATRIX announced earlier it will offer its…
#news